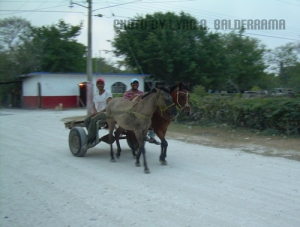 Horse-drawn cart in Anáhuac, Veracruz, May 2008

In some ways, the idea of the traditional door-to-door salesman still lives on, in many parts of Mexico.   There is a wide variety of products available from people who make their living selling on the street.

At first it seemed weird to me, to hear the spiel from the loudspeaker and then step out the door of our house to buy a kilo of tortillas from a guy in an old, unmarked, beat-up Tsuru.  But it is the thing to do.  This way, you are almost always assured to be buying piping hot tortillas rather than whatever is left, cold and crusty, in the insulated bins at the corner store.  And the price per kilo is bound to be lower from these cars sent out directly from the tortillería than from anywhere else.  The tortilla vendors are probably the most common type of salesperson; tortilla cars from various tortillerías may pass by the same street multiple times a day as a convenience for the residents, who tend to eat tortillas with every meal.

So when you hear the loudspeaker, tinkling bell, or shouting for a certain product, you stop what you’re doing, go outside, and flag down the vehicle/person.

There are bakery vehicles that pass through select neighborhoods about once a day.  These will usually be marked vans or marked trucks with toppers to put the trays of buns, donuts, and rolls in the bed.  In more rural locations — like in the Veracruz town where my husband grew up — men, women, or children still walk the streets with huge baskets (sometimes atop their heads) full of these same treats.  Some of our cousins used to earn extra change for the family by selling baked goods, before they were even teens.  **See also: El Panadero classic clip (in recent years, it has become popular for this same song to blast on the loudspeakers of travelling bakery trucks): http://www.youtube.com/watch?v=GkaI6MlKVGE

Some merchants drive around selling fruit — from observation, maybe once a week through any given neighborhood.  There may be one single type of fruit, or a variety of fruit.  The most common is probably the orange, though there is a wide range of other types like papaya, mango, watermelon, canteloupe, avocado, and banana.  The fruit vendors typically drive an old pickup truck, with a shade tarp over the bed to protect the fruit and any person sitting in the bed of the truck with the scale.  While tortilla guys usually only have one person in the vehicle, fruit trucks more often have multiple people to assist in selling the product.

Sometimes pickups come through with brooms, mops, trash cans, and all sorts of cleaning supplies.  This is perhaps even less common than the fruit truck.  The nice thing about the cleaning-products truck is that you can usually find a decent broom or mop made with a wood handle rather than plastic like you find more and more in the stores these days; in fact, the quality product from the pickup might even be made from a local company. 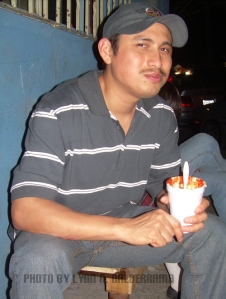 Aron and his elote, Monterrey, February 2008

There are trucks and horse-drawn wagons that sell soil and small plants.  For urban areas like where we were living, there is hardly a darn grassy spot to plant a tree.  Instead, the majority of residents have 3- to 5-gallon buckets that they use as containers for growing plants.   So the guy who comes along yelling about “tierrrrrrrr-rrrra!” is very handy because you can buy a small amount of soil or even some more plants from him without having to make a half-hour trip to Home Depot or an even longer trip to a regular, local greenhouse.

There are folks in vehicles selling cups of ice cream or paletas, candy and edible seeds, and occasionally, some selling hot tamales by
the dozen.  Young men go door-to-door with buckets and sponges, offering carwashes to residents with autos.  Trucks pass through multiple times a day delivering replacement jugs of filtered water.  There are bike-pedal or motorized carts used for selling treats like elotes enteros y en vaso — corn on the cob or off the cob, in a small cup — generally served with mayonnaise and spicy chili sauce slathered on top. — and when Aron translates this post, his mouth will be watering because (non-sweet!) elotes are what he misses perhaps the most about Mexico!

This part of the culture is so intriguing.  However, with the increasing popularity and availability (invasion?) of family vehicles and big box stores — from Mexican-born Soriana, to Walmart and its various sub-companies — I get the feeling that the street salesperson will soon become obsolete.  I have already seen a shift in types of services readily available on the street and in large stores, even within the past three or four years.  This is also in part because of territorial wars (bad guys, extortion, etc. — to keep it simple) that deter honest people from continuing business in many areas.  It is sad to see, because where there once were hardworking people without education still striving to excel at running their own businesses — however large or small — there are now people without education, struggling to find regular work in factories or department stores that demand a certain level of experience, knowledge, and reading/writing ability of their employees.  And so the societal struggle continues.

How will the coming years pan out for the merchants of Mexico?  What does the commercial shift mean for human interaction and economic success, both for our southern neighbor and for us?

Everyone loves a care package.

When we were living in Mexico, I felt so fortunate for the people in our lives who sent us packages.  I have friends and family who sent us presents for Christmas, and art supplies and other gifts, just because.  In particular, I have to thank my sister and her family for making sure our son D has had new jeans, shirts, and sweatshirts throughout each year since he was born.  But I also have to place high on a pedestal a couple of friends of mine who sent me used clothing in great condition, so that I wouldn’t feel (or look) so hopeless.

I would get anxious going into a Mexican store and trying to find clothes I wanted.  I have never been into the cheap, urban trends of skimpy, skin-tight, Bedazzled-style clothing in the same basic, annoying colors that they sell virtually everywhere in Monterrey.  Or anything cholombiano.  That’s just ridiculous.   There was a particular mall, Valle Oriente, in which I felt more comfortable — but it was far from where we were living, and while it was more like what I was used to in the U.S., the prices were not quite friendly enough for a couple of young parents who sold eggs from their home to make a living.  So we would “make do” — a term that is not at all foreign to me.

On a number of occasions, my friends sent me an array of clothes that meant just about the world to me.  One of my friends, Cassie, was especially awesome for the basics — the Gap favorite tees, warm sweaters, etc. that I ended up wearing nearly to threads.  And as usual, my friend Olivia (who maybe knew me too well sometimes) forced me to step outside of my normal boundaries by sending me flowy and differently-cut blouses and tanks in all styles, and lean jeans that she knew would fit me. 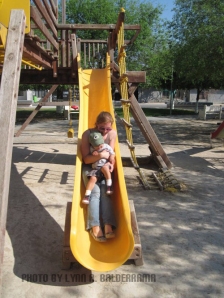 Wealth comes in many more forms aside from just money: D and me at a public plaza in Zuazua, Nuevo León.

When I received those hand-me-downs… goodness gracious, I felt like the wealthiest girl ever.

Sometimes when we are in the middle of a struggle, we feel miserable.  I’ve felt miserable plenty of times.  But there are always slivers of silver lining that help us get through those moments, and those are the moments that can begin to define our strength more than our happy times can.  People who have little tend to appreciate more; unfortunately, in modern First World society, we don’t have to live without much, and we end up taking practically everything for granted.  While others snub them, it is priceless to realize that we can appreciate the small things wherever we are.

Our first family photo! At our aunt’s house in San Nicolás, Nuevo León, in October 2009 — shortly after D and I arrived from the U.S.

Since our son D was born, I have spoken to him strictly in English, and Aron has spoken to him purely in Spanish.  As with many of our parenting tactics, this has been the cause of much criticism.  When we were in Mexico, some of Aron’s family members insisted that D would get confused by two languages.  But I had read numerous times in articles and I believe even in my favorite book at that time, El primer año del bebé,* that this was the way to do it — that the best method was for each parent to communicate with the child in his/her native language.

We would be with Mexican friends or acquaintances, I would say something to D in English, and because the adults were unable to comprehend what I was saying, they assumed my son wouldn’t, either.  My response: How in the world do you think my own son doesn’t understand me, when I talk to him every single day?  Now that we are in the U.S., Mexican acquaintances tell me I should speak to D in Spanish since he will learn English in school.

This makes me want to grind my teeth.  At least for the first years, I do not look at school as anything but a guide in my son’s education. The truth is that good habits, interest in reading and learning, respect, compassion, and love all start in the home.  In my generation, I feel we leave too many responsibilities to the schools when we need to place more emphasis on our own connections with, and influence on, our children.

It doesn’t make sense for us to wait on anyone else to teach our son something as essential as our native languages, especially knowing that it becomes exponentially more difficult for any person to learn a language as time passes.  And also because it is so darn natural to teach — just by talking to him normally every day.  With varied work schedules, Aron and I share parenting duties, each of us spending about the same amount of time with our son.  So D is not really missing out on Spanish over English, or vice versa. 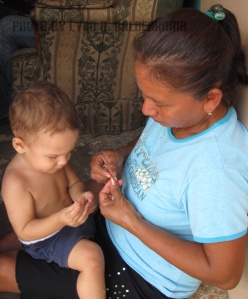 D sitting with his Grandma Santa in September 2010

We correct him on grammar and pronunciation, and encourage him so that he will know how to properly communicate as he grows older.  For us, it is important for him to know how to have conversations with the people we care about, regardless of whether we are in the U.S. or Mexico.

I can imagine that folks in numerous other prosperous countries look at us here in the U.S. and think we are unfortunate and silly because we don’t know 4+ languages by the time we are 5 years old.  It is our duty to show our kids the necessity of clinging to the traditions and languages that flow through our veins.  These are part of what keeps us grounded and what brings about amazing opportunities for us to relate to one another.

*Spanish version of a popular book.  My friend Cassie gave it to us as a gift when D was born.  Highly recommended: http://books.google.com/books/about/El_Primer_Ano_Del_Bebe_What_to_Expect_th.html?id=lS-lSKYHg98C